Period styles and a certain “noblesse” are characteristic of antique marble fireplaces. Although many marble mantels date from the 19th century, often with an economy of material (thin sheet marble), we do our best to source older more historic marble chimneypieces particularly from the 18th century. On the Parisian scene marble fireplaces became prevalent in 19th century Haussmann era apartments, not just as a means of heating each room, but also as a decorative feature in its own right. In other towns, cities and rural manor houses across France similar marble chimneypieces were chosen for the homes of the the upper middle classes and gentry. They would be installed in dining rooms, salons and libraries, with more modest sized chimneypieces in marble in the bedrooms. A more functional larger stone fireplace would be installed in the kitchen. We also provide wood fireplace mantels.

Marble colours come in greys, Carrera whites, black, pink, orange-reds, maroon etc, sometimes with pronounced veins and sometimes fairly uniform. No fireplaces are absolutely identical, so with their authentic patina they provide an elegant decorative feature in tradition period interiors. At BCA we have many French marble fireplaces with different French Period styles such as Louis XIV, Louis XV, Empire, Napoleon, Régence, Louis-Philippe. Each style corresponds to a period in the history of France and can be equally authentic featuring in interiors in other countries. Designers, architects and private clients across France, Europe, and around the world choose BCA Matériaux Anciens’ marble fireplace surrounds for their beautiful and inspired projects.

All our antique french fireplace, inevitably more than 100 years of age, are the subject of an application to the French Ministry of Culture to obtain an export certificate, for each and every one. They cannot be legally exported without this certification, and quite rightly so. We are in compliance with this important principal of conserving the very best of French « patrimoine » enabling the French authorities to monitor and if necessary block the export of anything of extra-ordinary cultural significance. This is a reason for BCA’s stocks of genuine antique marble fireplaces being relatively affordable despite their authenticity, because they are not sourced from major cultural « Monuments Historiques » of significance. However most of BCA Antique Materials reclaimed antique marble fireplaces are being purchased for projects actually in France.

We do NOT make new fireplaces whether in marble, stone or wood, and neither do we market new fake antique fireplaces manufactured by others and imported in large quantities from who-knows-where. Marble fireplace restoration can be organized for any with repairable damage, rather than selling a partially damaged mantel in the original condition. It is relatively easy for us in France to have a skilled marble restorer do what is required. However most purchasers are keen that their fireplace is recognizably and unmistakably antique and reclaimed for the sake of absolute authenticity.

Some marble fireplaces retain a detail that increased their efficiency for heating the room, so feature a back panel in cast iron, behind the grate. These would be 19th century marble chimneypieces, because older pre-Industrial Revolution antique marble fireplaces are more likely to have had a classic cast iron fireback. You can consult our stock section for antique iron firebacks on this BCA stock website to select an appropriate one, which can be despatched at the same time.

Our reclaimed fireplace mantels do not always come with a hearth. If you do need a hearth in antique reclaimed materials we can supply for example with our antique reclaimed bricks, or antique limestone. If we have spare available marble we are happy to propose that too. We occasionally have antique mirrors in stock which can go above the fireplace, thereby creating an overmantel. 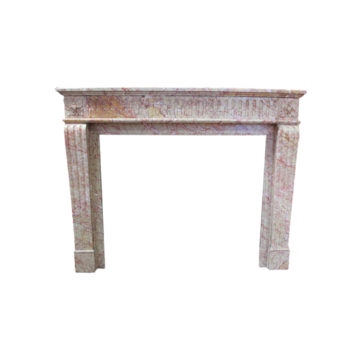 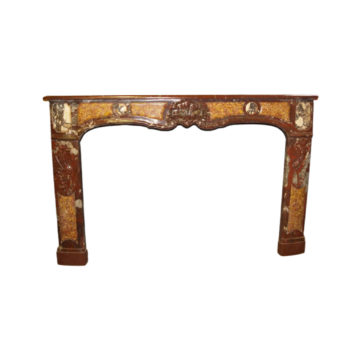 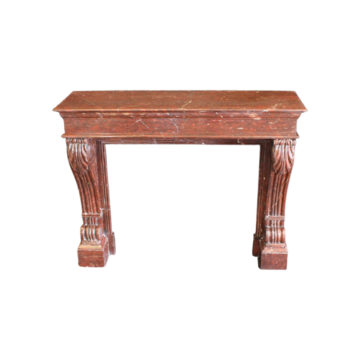 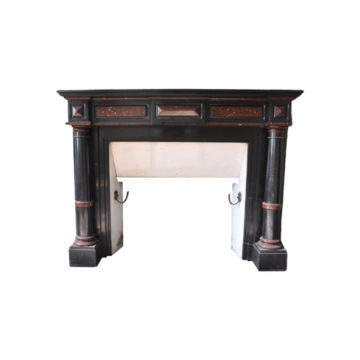 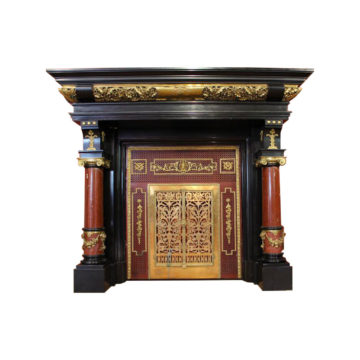