Marble has been a preferred stone for floors since « Antiquity », being associated with Ancient Greek, Roman, and all Mediterranean and Middle Eastern civilisations. Floors of the Age of Antiquity would never be available, and it would not be ethical for them to be anywhere except in their original villas and palaces, or in museums. However « younger » reclaimed antique marble floors from 18th, 19th or early 20th century buildings are occasionally available. They are now much-sought after for authentic restorations in a multitude of countries where marble is a traditional choice for Classic interiors.

It’s worth noting the authenticity of marble floors in historic buildings inspired by Classical Architecture in « Western » countries. In the age of the « Grand Tour » (no, not Jeremy Clarkson’s Grand Tour !) the upper echelons of 17th to mid 19th century privileged society hungered for knowledge of Greco-Roman culture because Roman and Greek societies were considered by the aristocracy as the origins of Western civilization. Europe’s nobility (and consequently their distant colonial cousins) sought to align themselves with Classical architecture, art, sculpture and interiors, and of course with the Greek and Roman empires’ military achievements and expansionism. Europe’s nobility were keen to position themselves as worthy of the founders of such civilization. Embarking on the « Grand Tour » to Italy or Greece was considered an essential experience for male members of privileged society, generally when they “came of age” at 21 years old. This education in Classical Architecture, which had in turn inspired earlier Renaissance architecture, didn’t just result in building characteristic neo-Classical marble colonnades in Doric, Ionic or Corinthian order across Europe. It also inspired a lavish abundance of decorative marble in palatial interiors and churches, which in turn inspired the more modest and affordable use of marble in more middle class « bourgeois » and public buildings.

To meet the demand for authentic restorations and Classical new-build projects, whenever possible BCA Antique Materials sources reclaimed marble floors and brings them into stock. Small surface areas are sold as individual jobs lots, having been reclaimed from rooms, so please check the surface areas of your own rooms so that an appropriate consignment is chosen without either wastage, or falling short. However bigger consignments can be sold in the exact quantity required for the project. Please note that it is rarer for us to find black or other colours than white or light grey marble (from Carrera or other quarries).

We also have a limited selection of black and white NEW marble (ref. 201668) which we have slightly worn on its upper surface and edges in order to replicate antique marble floors but at a lower cost and without limitation on quantities. The choice of new marble permits to a certain extent the production of bespoke sizes, so let us know what your requirements are if for example you require steps, doorway thresholds etc. 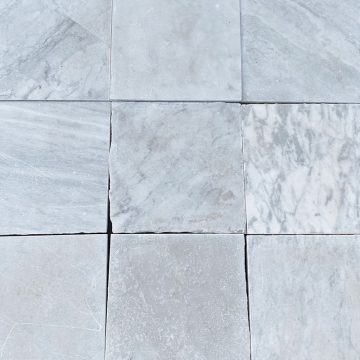 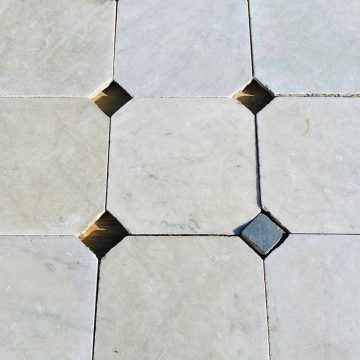